Washington’s home care workers are a vital part of our State’s pandemic response. COVID-19 has sickened and led to the deaths of thousands of older adults and essential workers, and has disproportionately impacted low-wage workers, people whose primary language is not English, and Black, Indigenous and people of color. Home care workers are highly trained healthcare professionals who have helped protect their clients from exposure to COVID-19.

Home care workers support medically fragile elders and people with disabilities in their homes, where people are safest during a pandemic. They are essential, low-wage workers who risk their own health and economic stability to protect their clients. Both caregivers and their clients are disproportionately immigrants, people whose primary language is not English, and Black, Indigenous and people of color. Even before the pandemic and its economic fallout, these communities already experienced higher rates of poverty and economic hardship, and, during the pandemic, have faced more severe health consequences.

The following report examines the role of the Medicaid Home Care Program in promoting the health of Washington residents, equity among communities, and sustainability of state systems and safety nets. The analysis is based on academic and scientific literature, data from state agencies like the Department of Health, and interviews we conducted in 2020 with home care workers and clients across the state. We conclude:

Staying home is the most powerful action any of us can do to reduce the spread of the virus. Home care workers help clients do this.

2. Caregivers provide care at great risk to themselves.

3. Investing in home care is an investment in Black, Indigenous and communities of color, communities most impacted by economic hardship and COVID-19.

When the Medicaid Home Care Program is strong, providing quality care and livable jobs, it protects some of the communities hardest hit by COVID-19: elders, people with disabilities, Black, Indigenous and people of color, immigrants and people whose primary language is not English.

Investing in home care saves the State money, by reducing institutionalization, hospitalization, and reliance on other systems and safety nets. Moreover, it saves and improves lives, keeping people most at risk of dying from COVID-19 away from possible exposure, reducing declines or relapses in clients’ conditions, and providing wages and benefits that increase caregivers’ access to basic needs for themselves and their families.

As we work to keep our state’s most vulnerable residents safe and reduce inequities in health and well-being, Washington must continue to invest in this highly qualified workforce through wages and benefits that ensure clients receive the care they need and caregivers are able to sustain themselves in their essential work.

We have exciting news for Washington caregivers. We have finished bargaining with the state and all home care agencies over the impact of the COVID-19 pandemic – and thanks to workers raising their voices, we have won some real improvements! Details in the links below.

Many of us are feeling hope on the horizon, as more and more people get the COVID-19 vaccines. Vaccine priorities continue to be updated regularly and now all of our clients ages 16 or older are eligible. Updated vaccine information, including how and where to get it for you or your client, can be found here.

Hazard pay has always been a temporary wage increase – but we are fighting to increase our wages because it shouldn’t take a pandemic for caregivers to make $20 an hour. Learn more at seiu775.org/timefor20 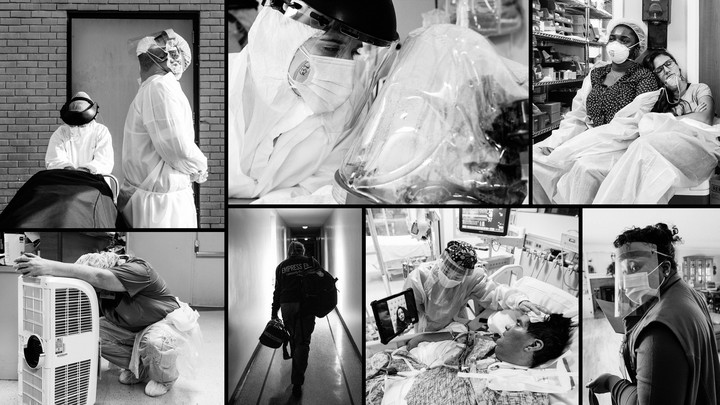 The COVID-19 crisis is nearing its end. But the nurses and home health aides who saw us through it may never recover.

People come to Shelly Hughes to get better. Most patients at the Washington State long-term-care facility she works at are there for the express purpose of getting well enough to go home. In a typical year, she would rarely see cases of “failure to thrive,” the technical term for a sharp and sudden decline in health. But last year, multiple people who were expected to make a full recovery went into rapid decline: They refused to eat, drink, or move, and then died.

She blames isolation, in part. Her facility has dramatically limited inside visitors since the start of the coronavirus pandemic, and employees wear full personal protective equipment, which makes communication difficult, especially with patients who are hard of hearing or have dementia. “Everyone that you see is basically a spaceman with no face,” she told me. She used to be able to comfort scared and lonely patients not just with her words, but with body language and facial expressions. Now she’s resorted to exaggerated gestures and writing questions down on a pad of paper.

Hughes and her co-workers are also trying to provide care while significantly understaffed, tending to far more patients than they should. Every shift has open slots, putting a greater burden on those who come in to work. “You physically do not have the caregivers and the nurses and social workers in the building to be able to sit and talk with people in a way that makes them feel like they’re not alone,” she said. “You feel really helpless.”

Read more in The Atlantic.

With more federal money coming from the American Rescue Plan Act passed last month, caregivers want Washington lawmakers to extend hazard pay and increase to at least $4, which is comparable to other essential workers.

Adam Glickman is secretary- treasurer for Service Employees International Union 775, which represents home caregivers in Washington. He said it’s a low-wage workforce and hazard pay will help retain and recruit workers at a crucial time.

«These workers are continuing to make a choice to risk their own health and their families’ health to go out and help seniors and people with disabilities be safe and healthy in their own homes,» said Glickman.

Wilson said caregivers brought to people’s attention how essential they’ve been during the pandemic.

SEIU 775 wants lawmakers to extend hazard pay before the Legislature is scheduled to adjourn on April 25.

We won a major victory this legislative session by securing Hazard Pay for homecare workers through June of 2023! As you can see in the chart below, Hazard Pay will continue to gradually decline, but our base Union contract wages will continue to increase. This keeps our wages stable.

We have two victories to share with you. First, we’ve won another extension of our temporary hazard pay for all home care workers through the end of June 2022! That’s over two years of continuous hazard pay during this pandemic.

For Agency Providers, we are negotiating hazard pay rates through the end of June with all our employers. Watch your email for more information.

We will provide more information on the timing of this bonus as we have it.

We’ll have more to share in the coming weeks, but it appears as if hazard pay will continue, though gradually decline, through 2024.

We expect to move quickly to negotiate an extension of hazard pay for April-June 2022, and then to negotiate hazard pay for July 2022-June 2023. We also expect to be able to continue, and even increase, the current enhanced wage rates workers are receiving now: the highest wages in the country for Medicaid home care workers.

We will then be working this year through the new Rate Setting Board and through negotiations with Consumer Direct for a new contract starting July 2023 – with the goal of establishing a starting wage of more than $20/hour and permanently increased wages for ALL caregivers.

December 21, 2021 Update: When the pandemic began, the federal government recognized the essential work of long-term care and temporarily increased funding for it. Our Union fought hard and turned that temporary funding into hazard pay for in-home care workers for 20 months.

Those hazard pay wage increases were set to expire at the end of this year, but by standing up together to tell the Governor and Legislature caregivers are essential and we deserve higher wages, we won another extension of hazard pay for home care workers!

IPs will receive $2.28 an hour hazard pay through March 2022! While this will be slightly less than our current hourly hazard pay rate, IPs will also be receiving a 13-cent an hour raise to our base wages as part of our IP union contract starting Jan. 1.

For APs, this means we will be going back to the bargaining table with all our employers to negotiate hazard pay through March 2022.

And, we are still fighting to make this wage increase permanent, so all long-term care workers make AT LEAST $20 an hour – but the first step was getting hazard pay extended into 2022!

This is the first step in our campaign to win permanent $20+ wages for all home care workers even after the temporary hazard pay ends: by winning an increase in our base wage scale.

This is a huge win! But our fight isn’t over! Since our raise doesn’t start until July, we still need to push the Governor and Washington State legislature to extend hazard pay, so it won’t expire in January. Can you send a message to your legislators asking them to pay essential workers a living wage?

Several caregivers joined us in a first bargaining session on September 17, when we demanded both an additional raise and to make the $2.50/hour hazard pay permanent.

“We need to make these higher wages permanent because caregivers like me deserve to be paid for the essential work we do!”

You can check back here or look out for emails from us for more bargaining updates.

Since the beginning of the COVID-19 pandemic, caregivers have been bargaining with the State for protection, pay, and support. We’ve sent petitions, shared our stories, and sat (virtually) across from the State at the bargaining table.

Bargaining with the State this year has been very different than our contract negotiations over the last decade. The State is facing a multi-billion-dollar deficit over the next several years because of the pandemic and the economic impact. And they have already imposed furloughs – unpaid days off – on all state employees – and in negotiations with other public employees, the State is proposing wage freezes and even reductions in pay.

While others saw these wage freezes and reductions, caregivers didn’t settle, and we now have two major updates for all in-home caregivers:

With the IP contract win, we still have a fight ahead of us. We need to demand that our Legislators fund our contract when they go into legislative session in January and make sure that all our clients continue to receive essential home care services. We’ll be telling lawmakers to fund our new contract, which will:

We won a better contract because members took action – emails, calls, and social media. Now, we need to do the same to fund the contract in the legislative session and to fight for revenue.

OLYMPIA, Wash. — Washington state caregivers are boosting a bill that closes some loopholes in the Long-Term Care Trust Act as it nears the governor’s desk.

Passed in 2019, the program created a trust fund for Washingtonians through a payroll premium that collects 58 cents for every $100 earned.

It was the first of its kind in the nation, but lawmakers want to tweak the program before it goes live.

Victoria Kahn, a family care provider and member of Service Employees International Union 775, said the program helps support her and her colleagues, such as helping to fund accessibility features like ramps.

«It’s something that us as caregivers have been working really hard for because we know long-term care is very vital for our nation, for everyone,» Kahn asserted.

Amirah Harris, a caregiver in Tacoma and member of SEIU 775, received the vaccine and said it’s important for caregivers like her to get it.

Harris added she’s spoken to colleagues who are skeptical about the vaccine and encourages them to do research into its safety.

Nearly 30% of Washingtonians have received at least one shot of the vaccine, according to the most recent data tracked by The New York Times.